DVD presentation of the movie “Bittersweet days”, by Marga Melià

On April 25, the Mallorca Film Commission will present the DVD of the indie romantic comedy Bittersweet days , the first opera by the Mallorcan filmmaker Marga Melià at La Misericòrdia Cultural Center. The press conference will be held at 11.30 in the Press Room (1st floor), will be open to all interested parties, and will be attended by Marga Melià (director), JJ Montero (distributor) and Pedro Barbadillo (Mallorca Film). Commission). 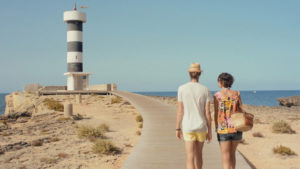 39 Escalones took over the editing of this DVD, which was assisted by the Mallorca Film Commission . In addition to the film, the DVD includes a number of interesting extras, including the short film “ The sock syndrome”, and several video clips by groups such as Lili’s House, Coriolà or Vacabou. , all of them directed by the Mallorcan filmmaker Marga Melià. It also has the video #MallorcaInspiresCinema, launched by the Mallorca Film Commission in order to attract filming in the spectacular locations of the island.

Bittersweet days is a film about identity, love, friendship and personal growth that reflects concerns of young people around the age of thirty in today’s globalized Barcelona. A bittersweet, feminine look that portrays the summer as they share a series of characters unhappy with their lives, lost before the multitude of possibilities they have at their disposal. The tape, a co-production of Nuu Films with IB3 TV, shot in Barcelona and Mallorca, was the first female feature film to feature in the Balearic Islands .

When Julia’s boyfriend has to relocate to London temporarily, she is forced to share an apartment with Luuk, an extraverted Dutch photographer. Their coexistence will make them both rethink their way of life.